In a world of auto-tune, songs by committee and laptops on stage, Brewster Moonface stands in stark contrast with its vocal driven blues and minimalist nail driving rhythm section. There are no meat suits or disco balls here, just plain honest roots, blues and soul from the center of the world – New York City. If NYC is the city that never sleeps then Brewster Moonface is the gritty diesel engine of music that keeps it awake and dancing.

Brewster Moonface consists of Justin Caputo, the Staten Island raised drummer with a passion for all things rhythmic. Andrew D’Angelo of Bensonhurst whose bass lines make him the Bootsy Collins of the blues. (Crazy) Jim Polk who stumbled out of the Detroit rust belt with a guitar and a Stevie Ray Vaughn record. And Brooklyn New York’s own Julie (Nasty) Notwicz whose vocals have been described as a combination of Janis Joplin and Big Mama Thorton.

Founded in New York City, Brewster Moonface set out with the simple mission of bringing the blues back to the mainstream and then to push it to the next step. After ending a run with her rock band, Julie resurrected Jim from his daily grind of drinking heavily and aging poorly and Brewster Moonface was born. A while later Justin was released on parole and Andrew wandered out of his basement compound to join the party. Since forming they have Opened for the legendary band War, and Guitar Virtuoso Rob Balducci and have been regular guests on City World Radio and Harmonica Joe’s Back Porch.  They have been regularly featured on  Dan Herman’s Radio Crystal Blue, Dennis Has a Podcast, Relix Magazine’s Women Who Rock, The Rocker with Lorenzo Mameli and numerous other broadcasts.  They have toured throughout the Country and have been apart of the Make Music New York, The Cosmic Blues and the Ultimate Louisiana Party Festivals. They are an annual performers in the TCS New York City Marathon.  In addition, Julie has been named a Singer Universe featured vocalist and a Women of Substance Radio winner. But most importantly they have been featured in the dimly lit clubs, alleyways and street-corners of world always on the mission of “Bringing Back the Blues!”

Jim is a sponsored artist of Spectraflex Cables.

Mid November Brewster hits the studio to record our second album!  Individual releases to happen throughout the winter and spring!

PLEASE NOTE: Due to the COVID-19 Pandemic to preserve the safety of our fans and ourselves we will only be performing limited online and socially distanced, safe events until the public health of all can be ensured. Please stay safe, wear a mask and keep supporting live music during this difficult time!

NEED A MASK?  WE HAVE LIMITED EDITION BREWSTER MOONFACE MASKS FOR SALE, JUST CHECK OUR MERCHANDISE LINK ABOVE. 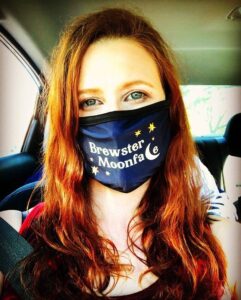